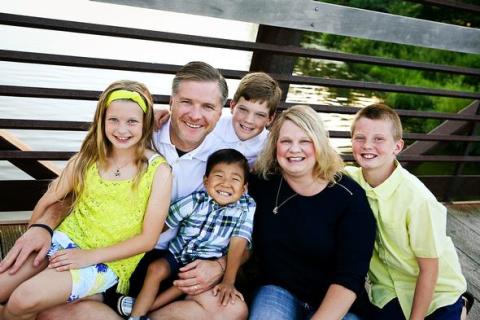 My wife Staci and I met while we were both attending Illinois State University.  We were married shortly after graduation in 1998 and moved to Janesville, Wisconsin where I started my career as a financial advisor.  In 2000, I was recruited by a national financial services firm to take over their Cedar Falls, Iowa office.  It was like coming home for us because Staci grew up in Waverly and her parents still live there today.

In 2003, we welcomed Christian into our family.  He keeps himself very busy between playing percussion for his school's band, robotics, Boy Scouts and anything related to creativity.  If I ever find a "creation" consisting of cardboard, tape and possibly some pipe cleaners, I know it's the work of Christian.  His mind never stops, which is a wonderful (and sometimes challenging) trait to have.

In 2006, Anna was born and she quickly found an affinity for horses.  In 2014, we were given a horse that she knew quite well by some very generous friends.  Ever since then, she loves riding her horse Misty and going to several Pony Club events throughout the year.  As she often says, "a day is never wasted when spent in the saddle."

Just a year and nine days after Anna, Carson was born in 2007.  He loves sports and just about anything that involves a battle.  It is not uncommon to find a war between Jedi's, tanks and even a few ninjas going on in his room.  While Christian is the very typical Type A first-born, Carson couldn't be more different.  To say Carson is laid back would be an understatement.  In spite of this, he always seems to land on his feet.

Finally, our family took a wonderful and unexpected turn in 2015.  Staci and I have supported an orphanage in China for several years.  In February of 2015, she was asked to travel to the orphanage to see the tremendous work they are doing first hand.  As a bucket-list item, she really wanted to go.  I was in favor of her going, as long as it wasn't the precursor to adopting, only because I felt we had our hands plenty full with our three children.  She agreed and off she went.  To make a long story short and through some amazing miracles, God changed my heart in a way only He can.  When she arrived home from her trip, I told her I thought we should adopt a boy she met while on the trip.  Shortly thereafter, we were filling out paperwork and progressing toward expanding our family.  In May of 2016, all five of us flew to China for 17 days and finalized the adoption of our fourth child, Jonah.  He was born with Spina Bifida, so he is paralyzed from his waist down, but that doesn't slow him down one bit.  He has a personality many times the size of himself and he continues to be a blessing to our entire family.

Staci has stayed home with our kids ever since Christian was born and she has enjoyed every minute of it.  When our three biological children were all in school, she regularly volunteered there.  She was in charge of the annual fundraiser at the children's school for several years, helps in each of their classrooms and is the past President of Anna's Pony Club.  Now that Jonah has joined our family, she will be teaching him from home until he is ready for Kindergarten in 2017.

I also keep busy volunteering in our kid's classrooms at school, have served on the leadership for Carson's Cub Scout Pack, help with Christian's robotics team and have coached a few of their athletic teams in the past.  I also spend a fair amount of time taking Anna to riding lessons and helping her grow in her love for horses.  Jonah never wants to stay put, so he is usually closely in tow no matter where we go.  Needless to say, we don't spend too much time sitting still, which is a great thing at this stage in life.  I've always said that I make my best investments at home and I strive to do that everyday.

This website is intended for informational purposes only. Despite our efforts to be accurate, these pages may contain errors and information that is no longer current. The information published on this website is subject to change on a regular basis without notice. This website should not be regarded as a complete analysis of the subjects discussed.